It has been a year since my pride and joy entered this world, my little darling grandson has turned 1 year old!!! Wow time flies.  Jackson is Mel's son and he is the cutest little guy and of course the love of my life!  Well this little guy is one lucky birthday boy as he actually had 4 birthday parties, huh!  His birthday was on 29Oct10 which happened to be a Friday this year and since mostly everyone works and by the time they would make it out to his party it would be Jackson's bedtime. So the party would have to wait. But as Grandparents we did manage a visit on his actual birthday for coffee and cake and of course Nonna (me) had to make him a birthday cake. 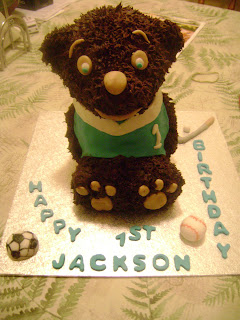 Isn't Jackson the cutiest thing!!!! I know I may be bias since he is my grandson but come on, he is the cutest baby EVER!!!!  So the teddy bear is the 1st cake........my first attempt at using this teddy bear pan.  I received it last Christmas as a gift from my nephew David, (love you David).  He got my name in the Kris Kringle game we played and thought I'd love the pan and I do!!!  But I never got a chance to try it out and thought this would be the perfect opportunity.  I used the cake recipe that came with the pan which was a basic vanilla cake and I filled it with chocolate fudge frosting which sort of glued the 2 halves together.  Since I had lots of choc fudge frosting I thought I'd use it for the fur BUT a lesson for the wise, never use choc fudge frosting for this type of application.  It softened up in the piping bag from the heat of my hand and I had to keep stopping, putting it all in the fridge to cool and then continue, which took a lot longer than normal. But I think it turned out cute.
Now the following day, the 30th of October, we had another milestone, my niece Alexandra celebrated her Sweet 16. HAPPY BIRTHDAY ALEX!!!  Her parents threw her a fabulous party which of course we all attended and had a great time!!!  so Mel & Phil decided to throw Jackson's birthday party the following weekend. He actually had 3 parties over the course of this weekend.  So what does that mean.......well other than he is one lucky little boy, Mel and I had to make 3 cakes........Yup that's right 3, count 'em, THREE cakes!!!!!  She had a party with all his little friends at "Balls of Fun" Saturday morning and then later in the day we had a family birthday party with all of our side of the family........we're just too big of a family to have both sides of the family together and then Sunday afternoon it was Phil's side of the family. (insert sigh here....for sheer exhaustion!)
Back to the cakes........Mel & I were up until 2:15am Saturday morning to complete the 3 cakes and guess who forgot to take a picture of the cake for the kids party.....moi......but all 3 cakes were the same or sort of the same.  Here's picture of last night's cake. 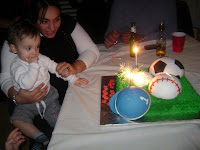 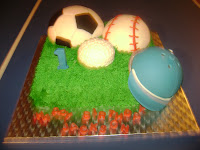 We should have added more to it, it sort of looks a little bare in the front but talk about exhaustion.  The base was a layer of choc and a layer of vanilla cake with choc fudge frosting for the filling, topped with butter cream frosting for the grass.  The soccer ball was choc cake and the baseball and golf ball were vanilla  cake all covered in white fondant and decorated in fondant.  The baseball cap and the #1 were done in gum paste.  I guess Jackson really has no choice but to like sports, let's see.....his dad loves and plays soccer, his mom loves and plays baseball and his grandfather (my hubby) loves ALL sports but plays a lot of golf.......it will be interesting to see what Jackson will prefer as he gets older.  What ever you choose honey, I'll be there to watch and cheer you on!!!! Love you Jacks!!!!!  ﻿﻿﻿﻿﻿﻿﻿﻿
﻿﻿﻿﻿﻿﻿﻿﻿