As promised here is a picture of the Wizard of Oz cake once it was cut; the picture was taken by Mel at the party today.  We received great reviews on the cake, all guests raved that it tasted as good as it looked, very moist was the consensus. 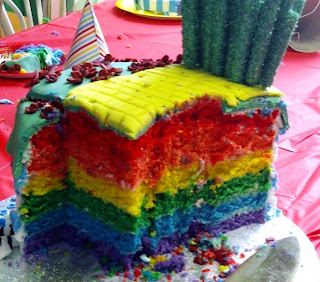 A little hard to distinguish the red and orange. In the picture they look like one layer.  Each layer was filled with cream cheese frosting but not too much so we could get the effect of the colours blending together like a rainbow.  Mel was told at the party that it was a nice mild cream cheese flavour added to the cake. I think if the layers were filled as we normally fill a cake it would have been too much with so many layers.  We're thrilled that the party was a big success and the cake was a hit.
Posted by m & m at 8:32 PM