Last year for Nicholas's 2nd birthday we made him a 3D Thomas the Train. This year Nicholas is into Toy Story.  His mom contacted us and asked if we could come up with a Toy Story themed cake. Immediately the bed came to mind.  I have seen so many renditions of this on the web and this is ours which was fun to make. 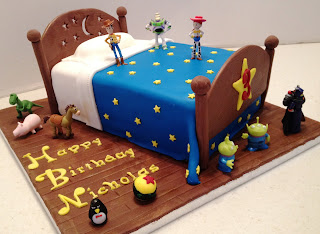 The cake is vanilla cake with vanilla mousse and fresh strawberries which seems to be our most requested flavour. The board is covered in brown fondant and scored to resemble floor boards. The head board & foot board is made from fondant & gum paste mix. 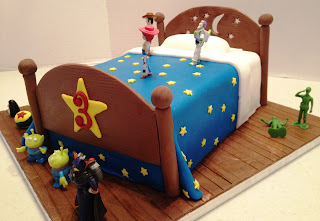 We purchased the characters which we included and that way Nicholas can keep them to play with after he enjoys his cake.  I dropped off the cake Saturday afternoon and Nicholas was taking a nap to be well rested for his party later that day.  The area where the party was to take place was all decked out in the Toy Story theme and Michelle said Nicholas would be so happy when he sees his cake.  Let's hope he is as thrilled as we were to create this for him. 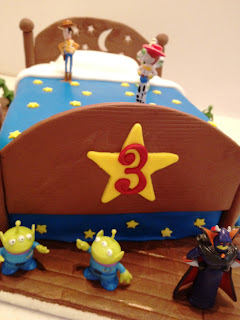