Well it's the day after Vincent's confirmation party celebration and his little cousin Michael made his 1st Communion.  We were delighted when Nancy contacted us and asked if we would make Michael's Communion cake for his celebration party which was held today at The Keg right after the mass. Nancy's only request for the cake was that the colour used in decorating the cake have blue with a bit of silver and gold. She left the design entirely up to us. 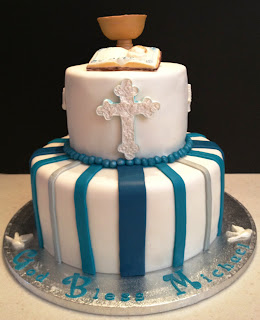 We started off with a 10" vanilla cake in which we tinted part of the batter blue and layered it with vanilla then blue then vanilla cake and filled it all with vanilla mousse and fresh blueberries. The top tier is a 6" chocolate cake filled with cookies and cream filling.  The stripes on the bottom tier were created with fondant in dark royal blue, a teal blue and a silver stripe. Since teal was the main colour Nancy was using for other elements of the party celebration we continued the teal for the bead boarder of the second tier and the lettering. The chalice was made from gum paste and painted gold for the top of the cake. We then filled it with gum paste circles to resemble the Communion host.  A small prayer book made from fondant was added and coloured to bring it to life. 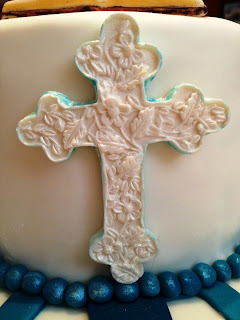 The cross which was placed on the front of the second tier was made from gum paste. Then small gum paste doves were added around the cake and on the board. Nancy was thrilled with the design when I dropped it off today. 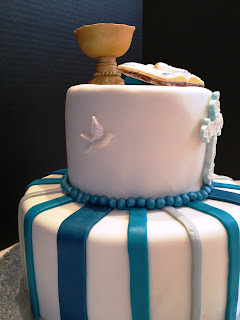 Congratulations Michael and may God Bless you!
Posted by m & m at 9:27 PM