On October 1st a special little boy turned ONE!  Milan's mom contacted me to make a couple of cakes, one for his actual birthday and one for a big family and friends party on the 3rd of October.  She was a bit undecided in which direction to take as Milan loves Mickey and also loves the Muppet Babies. So I suggested that since she was having 2 cakes we could do both themes.  She decided that the cake for his actual birthday was going to be Mickey.  Just a small 8" cake but she loved when I did a previous cake in a checker board reveal, so I made this Mickey cake in a chocolate and vanilla checker board with 2D Mickey on top. 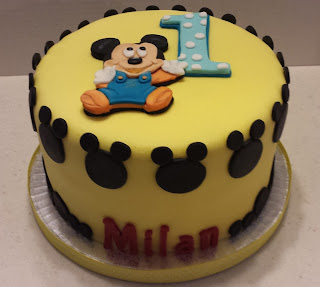 Mickey and the # 1 were done in fondant layers, a great technique taught by Corrie from Corrie Cakes. 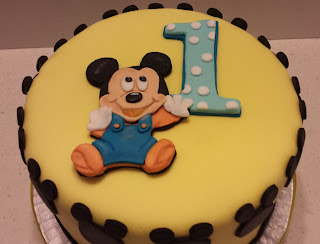 The layering of fondant pieces, almost like a puzzle, gives the character depth and a 2 dimensional look.  I also added some shading with edible dusts to bring the character to life. 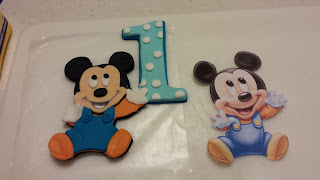 Here is a the character I made next to the picture of Mickey that I used for the character. I hadn't quite finished with the shading yet, but I think it turned out pretty close. 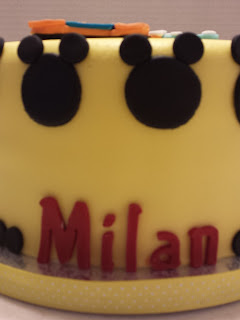 I finished off this cake with "Milan" front and center and with Mickey heads bordering the top edge and circles to border the bottom. 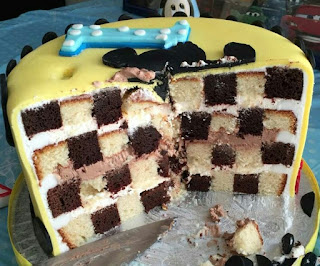 Milan's mom sent me this picture of the checker board reveal.  They were thrilled with the cake and couldn't wait to see the cake for the party.

So the party was held on the 3rd of October and we decided to do the theme of Muppet Babies.  They requested a slab cake with Muppet Babies on top. I decided to go the same route on designing the Muppet Babies cakes by making them 2D in layers of fondant. 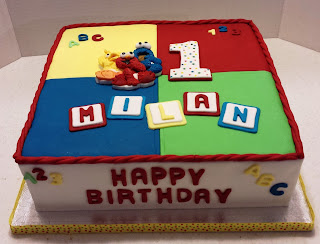 This 12" square cake was done in vanilla cake filled with chocolate cream.  The fun blocking of colours made for a nice back drop for Big Bird, Cookie Monster and Elmo which are sitting in diapers next to a big # 1 and Milan set to look like playing blocks. The cake is surrounded by white fondant and colourful ABC's and 123's and a cheerful "Happy Birthday" 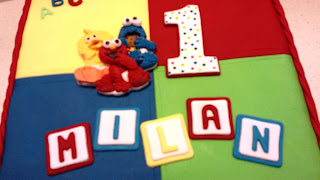 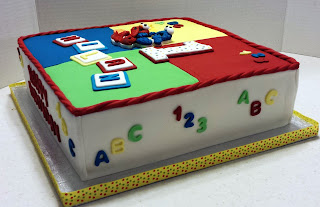 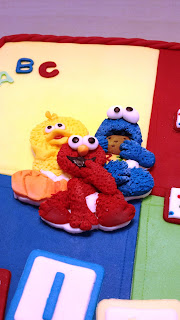 A closer look at the 3 Muppet babies. The layering and shading brought these 3 little guys to life. I also used small scissors and made little cuts all over the characters to give a fur like appearance. 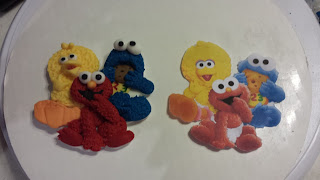 Here is a picture of the characters I made next to the picture I chose to use.  My characters in this picture still did not have the diapers showing and I had not done any of the dusting yet but they did turn out cute.