Jackson turns "2".  My grandson Jackson (Mel's son) is a very big fan of Mickey Mouse. In fact he is going to dress up as Mickey Mouse for Halloween. So when deciding what cake to make for his birthday it really was an easy decision, Mickey Mouse of course.  His birthday party was being held at Downy's Farm for a fun filled day of face painting, hay rides, pumpkin painting and other fun activities.  Chocolate cake filled with Oreo cream cheese filling covered in green fondant formed the base of Mickey's club house. 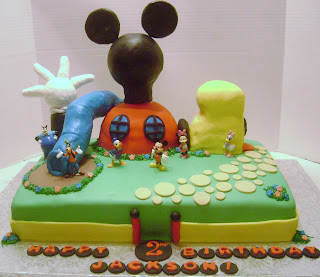 The main house is a vanilla 1/2 round cake filled with vanilla mousse and covered in red fondant. The boot garage is formed from rice krispie treats and covered in yellow fondant. Mickey's head, the slide and glove balloon are all made from Styrofoam and covered in fondant.  All other details are made from fondant.  The little character's were on loan to us from Jackson himself, though he had no idea why we wanted them, haha. But we had no luck in locating Pluto, :(  Probably buried in one of Jackson's toy boxes or behind the couch. Oh well, maybe next time you can come play with us Pluto. 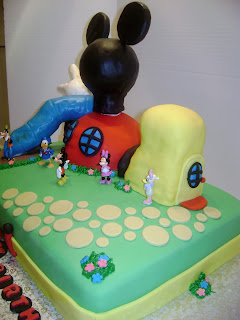 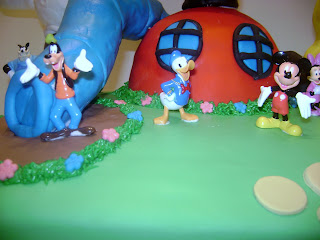 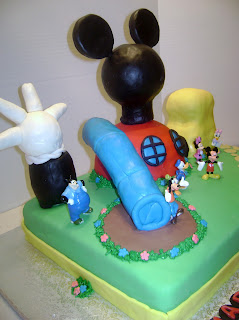 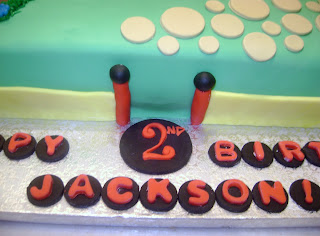 Well the cake was a big hit.  Jackson loved it as did all his little friends.
Happy 2nd Birthday Jackson!
We love you sooooooooo much!
Posted by m & m at 8:28 PM