I was asked by a close friend of my daughter to make her wedding cake. I've known Jen for some time and was thrilled when my daughter said she was getting married. But when she requested this cake and told me her wedding was to be held in Niagara I honestly thought "no way". That would be almost 2 hours in summer driving and I wasn't about to deliver a cake to Niagara.  Jen was so funny and said "no problem my parents will bring it with them".  My concern was if the cake would make it in one piece and Jen said "who cares if does it does if not oh well". I had to laugh at her simple attitude of what will be will be, don't stress it.  She just wanted me to make her cake and so I did.

She really had no big ideas on the cake only that I incorporated sunflowers and frangipani flowers.  Sunflowers because they are her favourite and the frangipani reminded her of Australia where she lived for a year.  We decided to go with square cakes as they would transport better, a little sturdier I would think. 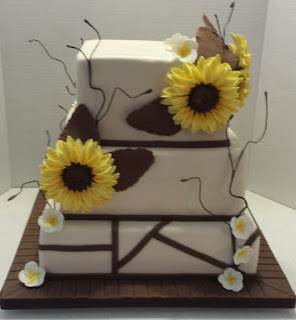 Jen was having an outdoor wedding and her colours were very earthy tones. 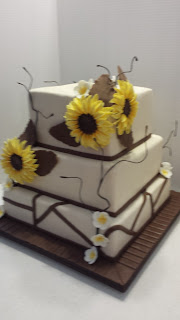 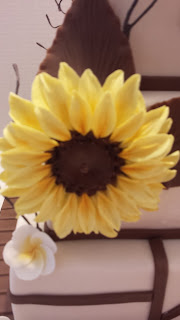 I have made gum paste sun flowers before but I found this awesome tutorial on line (sorry can't remember by who). The method of making this flower was tedious to say the least but very effective. Each petal is wired and inserted into the center and there are a lot of petals that make up one sun flower let me tell you.  But if I have to make sun flowers again this is the way to go, well worth the effort as they look so real.  I was very happy with the way they turned out. 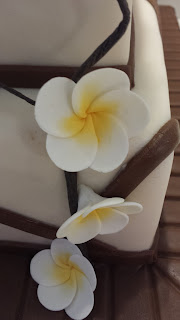 This was the 1st time I made Frangipani flowers, actually I had no idea what kind of flower they were, I had to look them up.  They are a very simple flower that is twisted into spirals. I thought though they are a simple plain flower they are rather pretty.  The twiggy things I put around the cake are wires covered in brown and twisted in various shapes to resemble branches or twigs. Jen saw them in a picture of a cake and said she like them.

Oh and by the way the cake did make it in one piece. Melissa and Phil along with my 2 grandkids attended the wedding and said the cake was a huge hit.