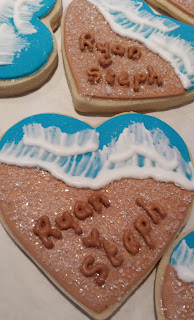 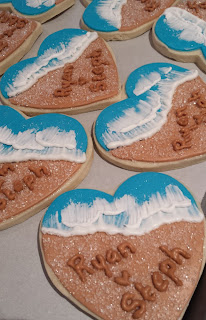 The cookies above were made by a friend of mine Tina. She makes amazing cookies but was in a bind and asked if I could help her as she had too much on her plate that week.  She brought the blank cookies and asked if I could decorate them for a destination wedding. These cookies were decorated in fondant with royal icing details. The waves were done with royal icing using the brush embroidery method. Course sugar was used to make the sand sparkle.  They were then packaged by Tina and were traveling with the wedding party to their destination wedding.
This next cake was requested by a friend of my husband. They were having a family celebration and asked for a small cake.  I was giving a picture of the family crest and made an edible print.  The fondant detailing around the cake was to mimic the blue and white checkerboard within the crest. 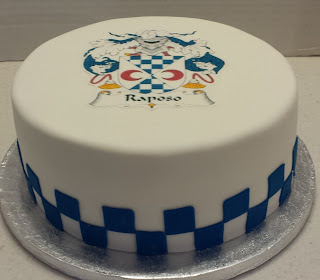 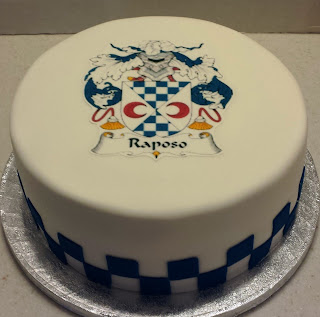 The next cake was requested from a good friend of mine for her sister Anna who was celebrating her 60th.  I have had the pleasure of meeting Anna and found she loves purses. So we made a generic purse in black and white fondant. 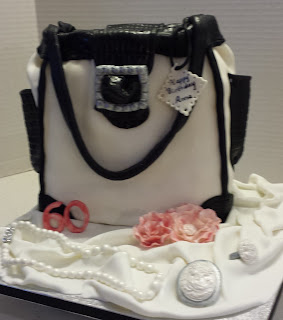 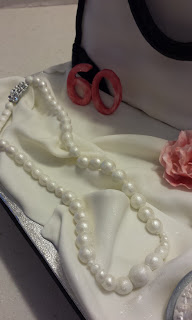 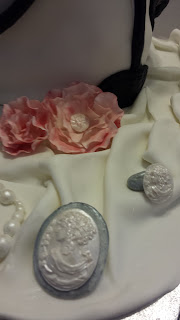 A string of fondant pearls, a gum paste broach and a cameo ring were added around the purse as Anna loves jewelry even more.  We added a couple of gum paste roses in pink to add that touch of colour.
The last cake for that weekend was for my cousin's grandson Christian who at the time was very much into anything to do with Spiderman.  So his mommy asked me to make a small Spiderman cake and some Spiderman cupcakes for his party. 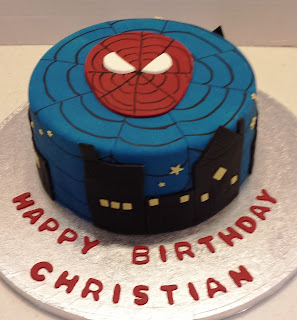 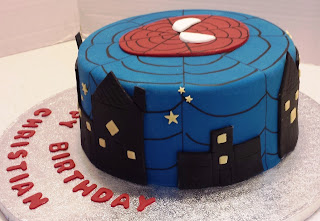 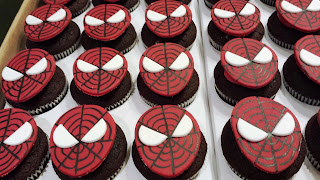 Since it's been quite a while since these cakes, cupcakes were made I do have trouble remembering the flavours.  I know they are in my files somewhere but I do remember Christian's cake and cupcakes were chocolate with chocolate filling.  Christian's and his mommy's favourite.  The cupcakes are topped with Spiderman faces done in fondant.

That's all my catch up for February 2015.  There will be more catching up to do for March, April, May and so on until we get to this month which happens to be September 2015.  There are a couple of breaks as hubby and I enjoyed a week in Cuba in March and then 2 weeks in Europe July and August 2015 and not to mention a few renovations here and there.  But back to work, so until my next update Ciao!